Myths and Folklore Wiki
Register
Don't have an account?
Sign In
Advertisement
in: Humans, Queens, Nobility,
and 5 more

Borghildr was the first wife of King Sigmundr and the Queen of Hunaland in Norse mythology. She bore him two sons named Hámundr (only in Frá dauða Sinfjötla from the Poetic Edda) and Helgi. She is the personification of the evening mist, or perhaps the moon, who kills the light of day.

The femine name Borghildr is a mix of two word *berganą / *burgz (to take care, to preserve, to protect, to save, to help, to rescue / fortification, stronghold, fortified city, castle) and *hildiz (battle, fight). The name refers to the warriors who fought in a castle or a fortress to defend its people.

Sinfjotli had set his sight on an exceedingly fair woman and yearned, above all things, for her. The brother of Borghildr, wife of King Sigmundr, had also asked for her hand: and this matter they fought out betwyxt themselves. Sinfjötli slayed the man in a contest to win the maiden's hand and won. He became very famous. When he came home, he told his father Sigmundr what had happened. Sigmundr then told Borghildr, and Borghildr wanted Sinfjötli to leave the kingdom for her brother's death. Sigmundr defended Sinfjötli, but offered Borghildr the weregild of her brother.

Borghildr, however, was not pleased by the King's offerings. She then held a funeral feast for her brother, serving drinks to each of the guests. She told Sinfjötli to drink, but he said it was poisoned, and Sigmundr took it instead. Borghildr said to Sinfjötli,

She then ordered him to drink a second time, but Sinfjötli wouldn't and Sigmundr drank it again. Borghildr dared him a third time, saying that he should drink off, if he had the heart of a Völsungr. Sigmundr was drunk at this point and wasn't thinking clearly, so he also bade Sinfjötli to drink. Sinfjötli drank it and died from its poison. Soon Borghildr was driven out of the kingdom by her enraged husband for killing his son and died shortly after that. 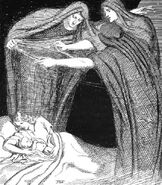 The Saga of the Volsungs, Part 1 (Volsung and Sigmund)

This page uses content from Wikipedia. The original article was at Borghildr (view authors). As with Myths and Folklore Wiki, the text of Wikipedia is available under the Creative Commons Attribution-Share Alike License 3.0 (Unported).
Community content is available under CC-BY-SA unless otherwise noted.