The Aspidochelone is first mentioned in Ancient Greek texts (namely, the Physiologus). Its name is derived from the Greek "aspis", meaning both "asp" (a type of snake- perhaps in reference to the creature's neck), and "shield" (perhaps in reference to the creature's shell), and the Greek "chelone", meaning "turtle". Thus, its name can be accurately translated as either "asp [-necked] turtle" or "shield turtle". Either translation is potentially correct.

The names "Aspidoceleon" and "Fastitocalon", however, have no known name translations. Based on this, it can be safely assumed that those names are simply misspellings or mistranslations of the original Greek "Aspidokhelone" (Latinized as "Aspidochelone").

The creature is later mentioned again in texts from Medieval Europe. However, Medieval texts do more than simply document its existence and exploits; they use the creature's characteristics as moral allegory (a practice quite common in medieval bestiaries). They even go so far as to compare its perceived insidious, deceptive nature to that of Satan , the Devil himself.

Though history and mythology/legend/religion studies do little to explain why the Aspidochelone is sometimes confused, in modern times, for its fish and whale island-creature counterparts, the Jasconius and the Zaratan. [1] The Aspidochelone has absolutely no problem with stowaways...

Regardless of which theory one subscribes to, though, the island is often perfectly capable of sustaining life, and nearly indistinguishable from any other island, unless, of course, the Aspidochelone gives itself away (for example, if an Aquatic Aspidochelone brought its head out of water for air, or if a Terrestrial Aspidochelone arose from the ground and began walking).

[3]"I have a feeling that this island is not quite what it seems..." Though, it should be known; perhaps one of the most difficult things to do to an Aspidochelone is to bother it, or provoke it to move. Its large size and tough exterior make it unafraid of nearly everything that crosses its path. Very little even seems to catch its attention. And when the Aspidochelone does get upset, it is actually more likely to react in annoyance or anger, than in fear.

And the annoyance or anger of the Aspidochelone is often quite dangerous, for most, if not all, creatures that stand in its way (especially inhabitants of its shell-island). A Terrestrial Aspidochelone may take off running, to either avoid or trample whatever bothers it. An Aquatic Aspidochelone may swim away at top speed (kicking up powerful and dangerous waves in the process), or simply submerge into the water to avoid—or drown—foes (with no regard for innocent life on its shell-island). [4] The shell of an Aspidochelone...a perfect island getaway. And the only thing commonly known to provoke this large creature to flee or retaliate is to make a bonfire on its shell (such as a campfire, set by an unwitting explorer, who doesn't know that his boat has washed ashore onto the shell of a living thing). Doing so brings the thought of danger and potential harm to the creature's mind, on pure instinct.

Otherwise, the Aspidochelone does not even become aggressive or irritable after the one and only mating season of its lifetime. And in the time of its mating season, when it DOES become aggressive (during which time females can lay a clutch of up to six [6] eggs), it's not nearly large enough to do more damage than an elephant, let alone to support an entire island ecosystem on its back.

So, mating season aside, the creature is actually quite docile, and perfectly willing to let living things make their homes on its shell. The Aquatic Aspidochelone even keeps its shell out of the water, only submerging its head and flippers, unless provoked to flee or retaliate. And until bothered or provoked, the Terrestrial Aspidochelone keeps its walking pace slow and steady (not nearly fast enough for passengers to fly off or be harmed). Some even send a warning signal to living creatures on its island-shell to take cover as it prepares for retaliation maneuvers, and won't act until it knows those creatures are safe. [5]"That sound...it's not thunder. It sounds like...like snoring!"

Furthermore, the Aspidochelone is a creature of great power, primarily due to its immense size and physical build.

Its skin is very tough and physically resilient, capable of withstanding great pain and injury. Its strength can go anywhere from pulling a large truck, to toppling buildings, trampling trees and worse. That same strength allows the Aquatic Aspidochelone to swim with great power and speed. In addition, the Aspidochelone can hold its breath for weeks at a time, even allowing it to fall asleep with its head submerged underwater without fear of drowning.

However, the most frightening powers of the Aspidochelone extend from its mental capability. Once the Aspidochelone has grown to a size where it can sustain an entire island ecosystem on its shell, it slowly develops the psychic ability to empathize with that ecosystem. This starts off as the Aspidochelone simply perceiving the layout and condition of its own shell-island. But over time, it branches out to exerting a subtle psychic control over that same ecosystem. [6]"What the--was this island here last week?" This results in capabilities similar to Geokinesis, Agrokinesis and Aerokinesis (respectively, control over the shell-island's earth/rock/soil/sand, plants and air/wind); even capabilities similar to Atmokinesis (control over the shell-island's distinct weather pattern), as well as an empathic bond to any animal born on the Aspidochelone's shell island.

What's more, the Aspidochelone's physiology gives it potential to survive for not just decades, but hundreds of years (centuries), even thousands of years (a millennium and beyond)...plenty of time to hone its ever-developing psychic powers...

While the Aspidochelone is highly fortified by its immense size, and the large ecosystem it sustains on its shell, 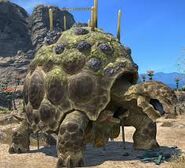