The Last of the Vǫlsungar

Áslaug is a figure in Norse mythology who appears in Snorri Sturluson's Edda, the Vǫlsunga saga and in the saga of Ragnarr Loðbrók as one of his wives.[1]

According to the 13th-century Ragnars saga loðbrókar, Áslaug was the daughter of Sigurðr and the shieldmaiden Brynhildr,[2] but was raised by Brynhildr's foster father Heimir. At the deaths of Sigurðr and Brynhildr, Heimir was concerned about Áslaug's security, so he made a harp large enough to hide the girl. He then travelled as a poor harp player carrying the harp containing the girl.[3]

They arrived at Spangereid at Lindesnes in Norway, where they stayed for the night in the house of the peasants Áki and Gríma. Áki believed the harp contained valuable items and told his wife Gríma. Gríma then persuaded him to murder Heimir as he was sleeping. However, when they broke the harp open, they discovered a little girl, whom they raised as their own, calling her Kráka ("Crow"). In order to hide her beauty - the accepted sign of her noble origins[2] - they rubbed her in tar and dressed her in a long hood.[2]

However, once as she was bathing, she was discovered by some of the men of the legendary king Ragnarr Loðbrók. Entranced by Kráka's beauty, they allowed the bread they were baking to burn; when Ragnarr inquired about this mishap, they told him about the girl. Ragnarr then sent for her, but in order to test her wits, he commanded her to arrive neither dressed nor undressed, neither fasting nor eating, and neither alone nor in company. Kráka arrived dressed in a net, biting an onion, and with only a dog as a companion. Impressed by her ingenuity and finding her a wise companion, Ragnarr proposed marriage to her, which she refused until he had accomplished his mission in Norway.[2]

According to Marilyn Jurich, Áslaug's tale in the Ragnars saga loðbrókar is the prototype of the "Clever Peasant Girl" folk tale, Aarne–Thompson no. 875. The saga matches the tale closely up to Áslaug's marriage to Ragnar, but even after that there are similarities: The saga highlights Áslaug's resolve (she refuses sex to Ragnarr until after marriage) and her seemingly preternatural wisdom: because Ragnarr insists on bedding her immediately after the wedding, contrary to her advice, their first son Ívarr was born weak, "boneless".[2]

The Brothers Grimm discuss the similarities of their tale 1815 #8 "Die kluge Bauerntochter," with the Nordic tale of Kráka in the appendix entry of the text. They also discuss similarities to a tale in Johannes Pauli's "Schimpf und Ernst" from 1519/1522.

A principal character in the television series Vikings (2013), played by Alyssa Sutherland, is loosely based on the legend, and introduced to Ragnar in the manner it described.[4] 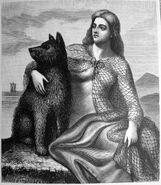 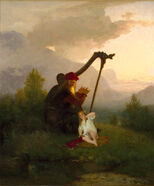 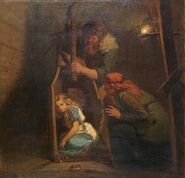 This page uses content from Wikipedia. The original article was at Aslaug (view authors). As with Myths and Folklore Wiki, the text of Wikipedia is available under the Creative Commons Attribution-Share Alike License 3.0 (Unported).
Community content is available under CC-BY-SA unless otherwise noted.
Advertisement