Myths and Folklore Wiki
Register
Don't have an account?
Sign In
Advertisement
in: Stubs, Greek figures, Greek giants,
and 2 more

This article about Argus Panoptes is a stub. You can help Myths and Folklore Wiki by expanding it.

Argus Panoptes was a giant with one hundred eyes, who Hera appointed as the guardian of Io, a mortal woman Zeus attempted to have an affair with. He was a very effective watchman indeed, for his time; he could keep constant watch on Io, having the ability to sleep with several eyes open. Zeus, wanting Io back, called upon Hermes to kill Argus. Hermes disguised himself as a shepherd, told Argus a long and sad saga until all of Argus's eyes were asleep, and then took the opportunity to slay him with a stone.

One of his great deeds was slaying Echidna, a serpent-legged monster, as she slept in her cave. 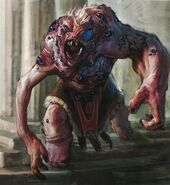 Argos in Scribblenauts Unlimited
Community content is available under CC-BY-SA unless otherwise noted.