Myths and Folklore Wiki
Register
Don't have an account?
Sign In
in: Stubs, Gods, Egyptian gods,
and 8 more

This article about Apep is a stub. You can help Myths and Folklore Wiki by expanding it.

Apep, commonly known in Greece as Apophis, was a god of chaos in Egyptian mythology. He is often portrayed as a snake and was the enemy of Ma'at. He is defeated daily by Ra and those aboard his Solar barge on is journey through Duat. He is also the TRUE embodiement of chaos so he is unable to be killed. This is the reason why Ra has not killed him yet for he is only ever able to be banished or exiled to the sea of chaos. He tried to take over the gods throne of power frequently only to be thwarted. He was originally Ra's umbilical cord.

Apep was extremely malevolent in his methods of trying to eat the sun and destroy the gods. This is an effect of his chaotic and unstable disposition and ways. Apep had no followers or relatives since he is the one true embodiment of chaos so anyone wanting to be close to him usually ended up killed or disfigured in chaotic ways in mental, physical and spiritual ways.

Apep was usually depicted as extremely large in size or large enough to make the gods look small. This resulted because he is so large that he is able to eat the sun whole in one bite. Occasionally he managed to succeed for a short time. This resulted in solar eclipses. 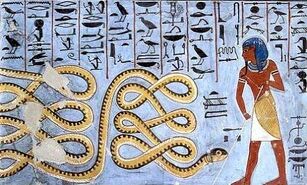 Apophis as shown in Egyptian art 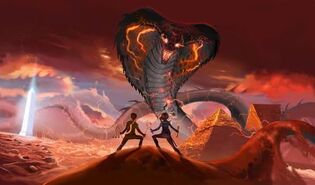 Apophis as depicted in the Kane Chronicles (graphic novel version)

Apophis as depicted in the film Gods of Egypt 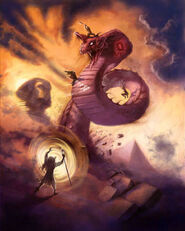 Apophis in the Kane Chronicles 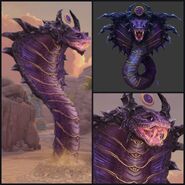 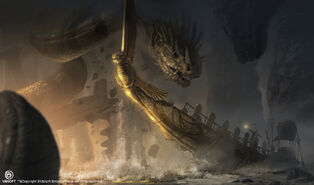