Myths and Folklore Wiki
Register
Don't have an account?
Sign In
Advertisement
in: Stubs, Norse figures, Norse dwarves,
and 2 more

This article about Andvari is a stub. You can help Myths and Folklore Wiki by expanding it.

In Norse mythology, Andvari (Old Norse "careful one") is a dwarf who lives underneath a waterfall and has the power to change himself into a fish at will. Andvari had a magical ring Andvaranaut, which helped him become wealthy.

Using a net provided by Rán, Loki catches him as a pike and forces him to give up his gold and Andvaranaut. Andvari cursed the stolen gold which would destroy anyone who possessed it. Loki used this cursed gold to pay the ransom to Fáfnir for the release of Óðinn and Hœnir.

After the deaths of Brynhildr and Sigurðr who later obtained the gold through killing Fáfnir, Gunnarr left Andvari's gold in a cave. Years later, Andvari discovered the cave and his lost gold, although his ring was lost forever.

In Richard Wagner's cycle of music dramas, Der Ring des Nibelungen, the character Alberich is based in some part on Andvari, but more on the Frankish sorcerer Alberich.

A depiction on the Drävle runestone from Uppland, Sweden.

Andvari depicted in part of the Drävle Runestone.

The drawing of Andvari on Årsunda runestone. 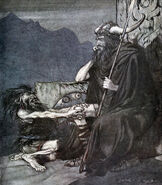 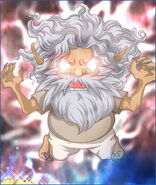 This page uses content from Wikipedia. The original article was at Andvari (view authors). As with Myths and Folklore Wiki, the text of Wikipedia is available under the Creative Commons Attribution-Share Alike License 3.0 (Unported).
Community content is available under CC-BY-SA unless otherwise noted.