This article about Amun is a stub. You can help Myths and Folklore Wiki by expanding it.

Amun is the king of the Egyptian pantheon, who was seen as a god of creation, sky, air and all things hidden.

He was originally the patron deity of Thebes, having replaced Montu by 21st century BC. After the rebellion of Thebes against the Hyksos and with the rule of Ahmose I, Amun was fused with Ra, becoming Amun-Ra and became the key deity within, often seen as a creator god and having the title "The Invisible One". He is sometimes even listed among the Ogdoad, the primordial gods of Egypt.

He is the husband of Mut and father of Khonsu, the moon god.

The Greeks and Romans later compared Amun to their chief gods, Zeus and Jupiter, which led to the combined gods Zeus Ammon and Jupiter Ammon.

Amun was also worshiped by the Berbers of Libya, most notably at the temple of the Oracle of Amun at Siwa oasis. The Berbers believed that Amun was the father of their principle deity, Gurzil.

Hymn for forgiveness from Amun

Hymn hoping for mercy from Amun-Re

Hymn to Amun, Re and Ptah 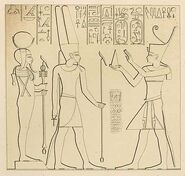 Amun with Ptah and pharaoh Psammuthis

Amun depicted in the shrine of Hathor 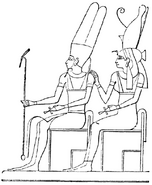 Amun with his wife Mut 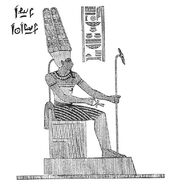 This page uses content from Wikipedia. The original article was at Amun (view authors). As with Myths and Folklore Wiki, the text of Wikipedia is available under the Creative Commons Attribution-Share Alike License 3.0 (Unported).