Myths and Folklore Wiki
Register
Don't have an account?
Sign In
Advertisement
in: Goddesses, Goddesses of Death, Egyptian goddesses,
and 6 more

In Egyptian mythology, Ammit, also known as Ammut or Ahemait, is a monster that lives in the Egyptian underworld, near the scales of justice. Her name means the Devourer of Souls.

Description: She is described as having the head of a crocodile, the body of a lion and the hindquaters of a hippo. These 3 animals are considered the most dangerous to Egyptians, thus forming this peculiar hybrid.

Duty: Ammit is not called Devourer of Souls for no reason. In the Hall of Two Truths, Anubis god of funerals, weighed the heart of a person against Ma'at, which stands for order, which is sometimes depicted symbolically as an ostritch feather, also known as the Feather of Truth. A pure heart would be lighter than the feather, but an evil one would be heavy with sin, thus tipping the scales. If the heart was judged to be not pure, Ammit would devour it, and the person undergoing judgement was not allowed to continue their voyage towards Osiris and immortality. Once Ammit swallowed the heart, the soul was believed to become restless forever; this was called "to die a second time". 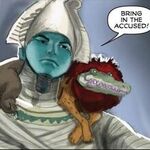