Goddess of the Sun and Universe

Amaterasu Omikami (天照大御神, meaning “Great Divinity Illuminating Heaven”) is the Japanese sun goddess, and is one of the most important deities in Japanese mythology, said to be a direct ancestor of the Japanese Imperial dynasty.

Amaterasu is the sister of Susanoo and Tsukuyomi (who was also her husband), the daughter of Izanagi (according to Nihon Shoki, her mother is Izanami). The Emperors of Japan claim direct descent from her, by way of ornament.

Amaterasu was born when another god, Izanagi, cleansed his left eye after returning from a failed attempt at retrieving his wife from the Land of Yomi (her brothers Tsukuyomi and Susano-o were born from washing the other eye and nose, respectively). Amaterasu married Tsukuyomi, and for a time, she shared the sky with him, controlling the sun and day while he ruled the moon and night, until he killed the food goddess Uke Mochi. This killing prompted Amaterasu to label him an evil spirit and separate from him, creating the division between day and night.

the Sun Hides Her Face

the texts also tell of a long-standing rivalry between Amaterasu and her other brother, Susanoo. When he was banished from Heaven by Izanagi, he went to bid his sister goodbye. Amaterasu was suspicious, demanding a contest to prove his good faith. Each of them took an object of the other's and from it birthed gods and goddesses. Amaterasu birthed three women from Susano's sword, while he birthed five men from her necklace. Claiming the gods were hers because they were born of her necklace, and the goddesses were his, she decided that she had won the challenge, as his item produced women. Frustrated at her insistence, Susanoo went on a rampage, destroying Amaterasu's rice fields, hurling a flayed pony at her loom, and killing one of her attendants in a fit of rage. Amaterasu, grieved and furious, hid inside the Ama-no-Iwato ("heavenly rock cave"), thus hiding the sun for a long period of time.

Finally, Ame-no-Uzume, kami of merriment, found a way to lure her out. Dressing herself in flowers, she started dancing on top of an overturned tub in front of the cave. The other gods began to laugh, even more so when she shed her "clothing" and danced naked. Curious to know what the fuss was about, Amaterasu looked out of the cave, and saw her own reflection in a mirror Uzume had placed in her view. She left the cave, and the other gods quickly blocked the entrance, persuading her to stay.

the siblings later amended their conflict when Susanoo gave her the Kusanagi-no-Tsurugi sword as a reconciliation gift.

According to legend, Amaterasu bequeathed three sacred objects to the Imperial family: the mirror Yata no Kagami, the jewel piece Yasakani no Magatama, and the sword, Kusanagi-no-Tsurugi. These sacred objects collectively became the Three Imperial Regalia of Japan.

As the primary goddess of Shintoism, Amaterasu is still worshiped in Japan.

Amaterasu in the Cave 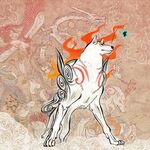 "Amaterasu Emerging from the Cave"