Ōkuninushi (Japanese: 大国主) was a famous hero and one of the more personable gods as part of the Japanese Izumo mythology. His name literally translates to "Great Land-Owner" or "Great Land Master" and he was in charge of firming the land during creation. He was known as the Lord of the Central Land of Reed Plains (another name for Japan). In Shintoism, Okuninushi-no-Mikoto is considered the god of the earth and the underworld, as well as of relationships, nation-building, commerce, medicine, and agriculture.

He is also known as Ōmononushi (大物主神) or Onamuchi, and the amiable Daikoku/Daikokuten of the Seven Lucky Gods is considered his counterpart (as their names have a similar reading).

The White Hare of Inaba[]

Okuninushi was the youngest sibling of 80 cruel brothers, all deities living in Izumo. Hearing of the beautiful goddess Yagami-hime in the land of Inaba, every one of the brothers decided to try and woo her. Bringing along Okuninushi in order to carry all their luggage, he soon lagged behind his brothers from the burden. On the way to Inaba, the large group of brothers came across a suffering fur-less hare, and decided to play a prank on it. They advised it to bathe in seawater, then stand on top of a high peak and let the winds and sun dry it, telling the hare this would help it recover more quickly. The hare did as the brothers said, but instead of recovering, things worsened as its skin dried out and cracked, agitated further by salt from the seawater. Unable to stand the pain, the hare fell to the ground. Trailing behind his brothers, when Okuninushi found the crying rabbit he asked it what had happened. The rabbit told its story.

Originally from the island of Oki, the hare had wanted to travel to the mainland but was unable to do so on his own. So coming up with an idea, he challenged the sharks surrounding the island. He told them "Let’s see which there are more of, you sharks or us rabbits. Have all your fellow sharks line up one by one from here to Cape Keta, and I’ll count you. Then we’ll know for sure which group is bigger." As the sharks lined up, the hare jumped from shark to shark, counting each one. Just before it leapt to the mainland, it boasted about tricking the sharks, so the final shark bit off the rabbit's fur. Lying on the ground, that was where he met the large group of gods who's advice had made things worse.

After hearing the tale, Okuninushi told the hare to wash itself in the nearby fresh water river, then lay out fluff from the cattails and roll in it. Doing so, the rabbit's pain was soothed and and it soon completely healed. In gratitude the hare gave a prophecy that Yagami-hime would chose Okuninushi over all of his brothers. When Okuninushi finally arrived where his brother's were, the princess told the elder brothers that she would have nothing to do with any of them, but would marry Okuninushi.

Enraged by and jealous of their younger brother who obtained the affection of the goddess-princess of Inaba, the elder brothers schemed to kill Okuninushi. They killed him twice, once with a smoldering boulder and once with a trap in the woods. Both times he was killed, Okuninushi was revived by his mother Sashikuni-waka-hime, a clam goddess. After the second time, Okuninushi was able to escape to the underworld ruled by Susanoo.

The Trials of the Underworld[]

After fleeing to the underworld Ne no Kuni, Okuninushi met and fell in love with Suseri-hime. Her father, Susanoo, however, did not approve of the relationship and so decided to test the young man. First, he was told to sleep in a room full of snakes. Suseri-hime gave him a scarf, that when waved three times, would freeze the snakes, allowing Okuninushi to pass the night without incident. Second, he was to stay in a room full of wasps and centipedes. Again he was helped by Suseri-hime with a scarf that worked in the same way as the first. Finally, Susanoo took him to a big field and shot an arrow, telling Okuninushi to retrieve it, before setting the field on fire. About to succumb to the flames, a mouse ran up to him and told him that the "Once inside, it’s big and hollow, but the entrance is narrow and tight." Recognizing the invitation into the mouse's home, Okuninushi stomped on the hole where a large burrow opened up and he was able to wait out the fire. The mouse also helped him find the arrow and he returned it to Susanoo.

Still not completely unsatisfied, Susanoo then told Okuninushi to pick the lice out of his hair. However, rather than lice Okuninushi found many centipedes. Suseri-hime again came to help him, giving him red clay and berries, which he chewed together and spat out, causing Susanoo to think it was the centipedes he was chewing and spitting out. Eventually falling asleep, Okuninushi then tied Susanoo's hair to the rafters of the house and blocked the door with a boulder. Then taking the sleeping god's sword, harp, and bow and arrows, Okuninushi and Suseri-hime fled together. But when the harp knocked against a tree. Susanoo awoke and his house fell around him, before he chased the couple all the way to the entrance to the underworld.

Fortunately, during the trials Susanoo had grown fond of Okuninushi, and so instead of catching them he let them go. Instead he told Okuninushi to take his tools to the surface and defeat his brothers, then build a palace for Suseri-hime that would reach the heavens.

Using the magical items lent by Susanoo, Okuninushi defeated all of his brothers in Izumo, allowing him to become ruler of the land. With the help of the dwarf god Sukunabiko, Okuninushi began to firm/form the land. Along with his friend the dwarf god they also developed medicine and managed to decrease the destructiveness of birds and insects. For this a shrine was built in Izumo for Okuninushi.

When Takemikazuchi descended heaven with the command to pacify and unify the Central Land of Reed Plains, Okuninushi transferred his power over to Niningi, the grandson of Amaterasu. For this he was given rulership of magic and the unseen, where he then moved to the land of darkness, the underworld.

A descendant of Susanoo, Okuninushi had multiple wives and according to an "alternate writing" he had around 181 children.

A statue of Okuninushi in Izumo 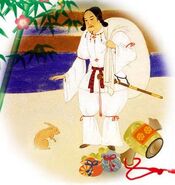 Okuninushi as portrayed in Puzzles & Dragons

Okuninushi as portrayed in Kamisama Hajimemashta 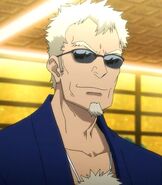 Okuninushi as portrayed in Noragami

A form of Okuninushi in Shin Megami Tensei III:Nocturne